Our centenary celebration recalls the fact that Sacred Heart became a parish in 1910 when Father Denis Bailey was appointed as the first resident pastor.  He took up residence at Hotel Caroly, built the year before by John J. Vignolo, a member of his flock.

Fr. Bailey carried out the plans to secure a new property and build a new church.  A portion of the present parish property of one square block in the Highland Park tract at Lyons Avenue and Rose Street was secured for $2,000, and the remainder of the block was donated by parishioners Edward Lyons (for whom the street is named) and John Denair.  The building committee included Charles Kinnucan, John Denair, Antone Vieira, Joseph Silveria, Manuel Pedras, Roger Young, Manuel Robella and Manuel Serpa.

San Francisco architect John J. Foley incorporated Romanesque architecture with Renaissance style, using a red brick veneer on the exterior, framed with white medusa cement cornices and towers of galvanized metal, painted and sprinkled with white Monterey sand.  On the interior the Oregon pine woodwork was stained to match the oak pews with a seating capacity of 400, all secured to the slanted floor for full view of the sanctuary.

Next to the church a two-story rectory home for the priests was built with the same brick veneer to match the church.

The new Church of the Sacred Heart of Jesus was dedicated in a ceremonu held on March 10, 1012, with The Most Reverend W. P. Riordan, Archbishop of San Francisco, officiating. Four priests assisted him.

The original wooden Sacred Heart Church was not left behind.  Soon after the conerstone of the new church was laind in Novemeber of 1911, the original structure was transported across town and placed at the corner of Cooper Avenue and Rose Street where it continued to be used as a parish hall for the next five decades.

In October 1912, it was announced that a Catholic hospital and training school was to be build on the corner of Lyons Avenue and Oak Street.  The planned single story structure of Spanish Mission style architecture containing twenty rooms, however, never came to fruition, nor did plans for the establishment of a Catholic cemetery, which was considered in 1909.

On September 9, 1928 a tragic fire destroyed the beautiful brick church that had been built in 1912. Parishioners banded together, however, and in one year were able to reconstruct the church on the same foundations and int he same style.  An article in the Turlock Tribune, October 25, 1929 reads as follows: "First services were held on Sunday in the new $30,000 Sacred Heart Church that replaces the one burned in the Spetember, 1928.  The new edifice conforms in architecture to the previous structure and many of the interior furnishings that were saved during the fire are being used in the new building, erected on the site of the destroyed edifice.  Altars and other needed furnishings will be installed on their arrival here, after which the building will be dedicated by the archbishop, sometime in November.  Ladies of the church have purchased many of the altar appointments, raising funds by means of card parties, dances and bazaars."

In the beginning of 1978, catechism classes began in Spanish as well under the direction of Carmen Alvarez, at first in the church before Mass and then in the classrooms.  In 1983 the Diocese began to send Spanish-speaking priests to reside at Sacred Heart, beginning with Fr. Ernesto Arbelaez, who started new ministries in spanish such as Marriage Preparation and the youth group "Navegantes Por Cristo."  Then came Fathers Octavio Zavala, Gustavo Quintero, Oskar Pelaez, Misael Avila, Ramon Benjarano, Salvador Ledesma, Leo Suarez, David Dutra, Luis Navarro and Jairo Ramirez.  Since 2001 we have benefited from the services of Father Pedro Olmos, who has been confined to a wheelchair because of a tragic automobile accident when he was a young priest in the Diocese of Guadalajara.

Planning for the new Sacred Heart Church began in 1969.  Pastor Fr. Manuel V. Alvernaz, with the 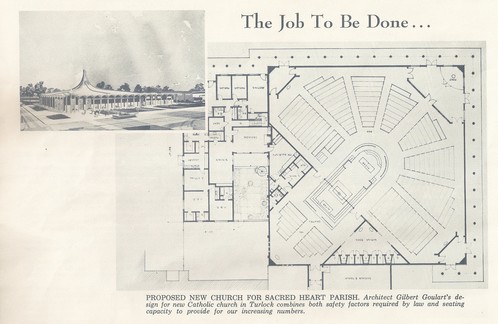 able assistance of Associate Pastor Fr. Francis Prendergast, consulted with architect Gilbert W. Goulart, A.I.A., a Sacred Heart parishioner.  On October 21, 1969, while the plans were being drawn, the fundraising drive began led by Chairmen Ernie Gemperle, Elwood Escobar, John J. Souza and Frank McNeff.  The people of Sacred Heart responded whole-heartedly and threw themselves energetically into the gigantic task of raising the needed funds.  Late in 1969 architect Goulart turned in the final plans and the contract for building was awarded to Rock Contruction Co. of Stockton in November of 1970.

With the demolition of the old church and rectory, temporary Mass facilities were set up in the school gym, and the first mass there in  was celebrated on November 22, 1970.  During the 1 1/2 years of contruction the priests lived at 737 E. Main Street and the parish offices were at 1150 Lyons Avenue.

Construction of the church and rectory was completed at a final cost of $819,454.77, and the priest moved into the new rectory at 650 Rose Street on February 6, 1972. At long last, on April 30, 1972, the first Mass was celebrated in the beautiful and spacious new Sacred Heart Church: and Monday, May 1st, was the day of Dedication and Blessing.  Officiating at the 7:30 P.M. ceremonies was the Most Rev. Jose V. Alvernaz, D.D., Archbishop of Goa and Patriarch of the East Indies, brother of the Pastor.  Presiding and delivering the homily was the Most Rev. Merlin J. Guilfoyle, D.D., Bishop of Stockton.  The Consecration of Sacred Heart Church was held on Saturday, May 13, 1972 at 10:00 A.M. by the Most Rev. Jose V. Alvernaz, Archbishop of Goa.  Father Louis L. Sweeny gave the stirring homily.  The inspiring ceremonies magnified the beauty of the stained glass windows designed by Willet Stained Glass Studios of Philadelphia, and the interior statues of the Sacred Heart, St. Joseph (purchased by the Knights of Columbus) and the Blessed Mother (bought by the Young Ladies Institue).  These thee statues and magnificent white marble Sacred Heart statue that dominates the church front are the sculpture creations of Maia Brothers of O'Porto, Portugal.

With the consecration of the church of the Sacred Heart of Jesus, the continuity of the profound faith of our parishioners was reaffirmed and strengthened. 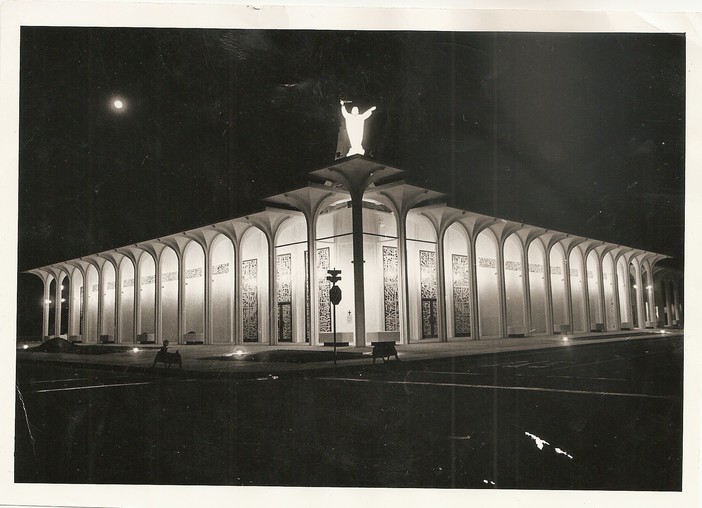